Start Picking immediately with any of your Warehouse Operators, Price-Checking with any of the Retail Shop-floor Clarks, Postal Sorting with any of your Postmen, or any other Voice application without the need of lengthy Voice-Operator training.
MCL-Voice Next Generation Voice Solution is a speaker independent voice system. As there is no lengthy voice system training required for each new worker this translates into instant productivity gain for your organization.
For example, seasonal or transient workers can be put to work quickly to expand your organization's workforce during seasonal peaks -no lengthy voice system training is necessary before they can get started. 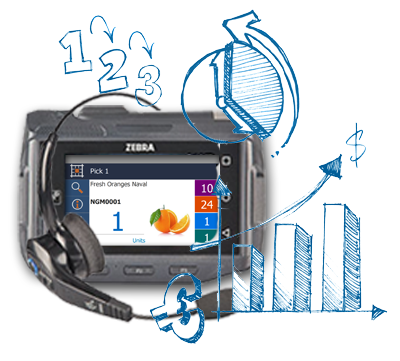 Speaker dependent systems (first generation voice systems) requires each worker to train the voice system for his/her individual speech pattern, dialect, and language. All words used in the Voice Dialog (0 to 9 and control words) needs to be recorded before the voice system can be used. This can take easily up to 30 min. per each new worker.
And this is only the 'visible training time' as usually your workers will have to retrain some of the words over-time as they are changing their way of speaking to the system, e.g. they will speak more quickly or co-articulated (connecting spoken words together) resulting in potential poor recognition.


As MCL's Next Generation Voice Solution is a speaker independent voice system it completely eliminates the need for time-consuming voice training.

Your Next Generation Speaker Independent MCL-Voice Solution is based on a database which contains phonemes (smallest contrastive unit in the sound system of a language) and words in different languages to which your operator's voice is matched. This allows voice operators to start immediately without the need of lengthy voice system trainings. 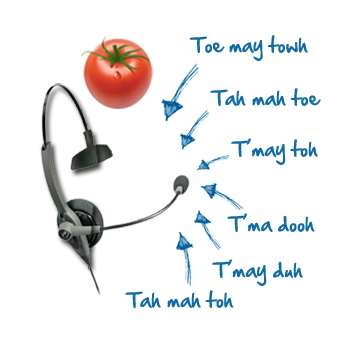 Speak the way you want

One of the key aspects of a voice system is to allow your voice operators to continue speaking in a natural way to your Next Generation Voice Solution. Not only will this increase user productivity, it will also contribute greatly to the voice operator's user satisfaction.

Your Next Generation Voice System will continue recognizing each speech input as you would expect a voice system to do, including dialects.

How is this done?
Each language is composed out of a set of phonemes which is recognized by the speech engine inside the voice System. A dialect is not different from this principle and your Next Generation Voice Solution will be able to cope with dialects.

Operators speaking with a Dialect?

No worries, your voice operators can continue speaking thir own languages as the Next Generation Voice System adapts itself to your operator. 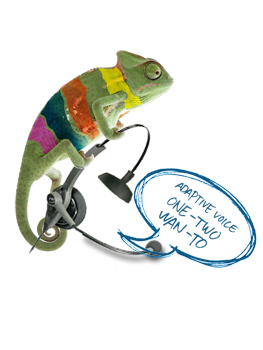 In occasional situations the voice system can be challenged on its voice recognition capabilities, e.g. when foreign workers are not speaking in their native language to the voice system (imagine: a native chinese worker speaking numeric digits in another language, for example, swedish...).

Some of the words used in the application pronounced by such foreign workers might need adaptations.

Your Next Generation Voice Solution allows for advanced voice recognition performance optimization features to overcome such kind of challenges.

Your Next Generation MCL-Voice Solution running on the mobile devices will continiously listen to the operator's voice and analyze its characteristics. Based on the analysis MCL-Voice will automatically further improve the speech recognition during the voice operations.

You don't even need to worry when your voice operator comes to work with a cold, resulting in a slightly changed voice. The system will automatically adapt to this, all on the fly without the need of any manual involvement of your operator. 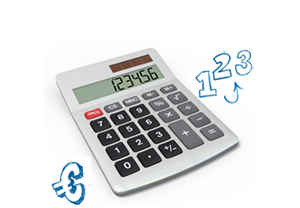 Each traditional voice system requires at least 25 to 30 minutes voice training per each voice operator. This doesn't include yet the so called 'hidden' training costs often forgot in the overall involved trainig costs of your operators.

Usually when your operators are being instructed to train your traditional voice system they will train the system in a very nice and perfect manner. Your operators are most probably speaking clearly and with isolated words to the system.
However, when they are starting to use your traditional voice system in practice suddenly they are speaking in their natural way and most probably not equivilent anymore as how the system was trained initially, which causes the system to prompt them to repeat the words as they are no longer recognized


Your Next Generation Voice system continues where your traditional voice system requires retraining of words.....calculate the benefits.

(fact: most of the traditional voice systems do have a retraining function accessable at any time during the voice application!! Imagine the potential loss in order-picking productivity when your order pickers are starting to retrain words during their main orderpicking task)

Now that you are calculating the benefits, please multiply this by the number of voice operators you put to work over the coming 5 years. Not only will this result in huge productivity gain, it will also save enormous on the overall costs.

Save Time - Be more Productive

Save Time - Be more Productive

As MCL's offers a speaker independent Next Generation Voice System your operators are saving huge time as they do not train each of the voice commands before they can actually start voice picking. This translates into instant productivity gain and huge cost savings

MCL's Next Generation Voice System allows your voice operators to continue speaking in their natural way with less repeats, easier handling of the system, resulting in improved user satisfaction